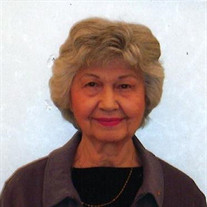 Amanda Mary (nee Kerpan) Wolf passed away on Thursday, September 28 after 95 amazing years of life filled with a love of family, friends, dance, travel, and her Croatian heritage. She was raised on a farm north of Waukegan in Beach Park in a blended family that included 16 children. Although a farm girl, Amanda preferred spending her time taking dance and elocution lessons over tending to chores in the barn. After her 1939 graduation from Waukegan Township High School, Amanda attended Waukegan Business College and became proficient in typing, shorthand, and bookkeeping. She enjoyed her time working for the National Guard and Deep Freeze, but took a short break from the office life to join a dance troupe that traveled throughout the Midwest performing at state fairs, and to dance with the USO during the war years. Ten years after high school, Amanda was set up on a blind date with a former classmate Jim Wolf. They married in 1953 and raised three children on North Avenue. Ever supportive parents, they never missed a school play or dance recital. While raising her children, Amanda worked part-time in the St. Anastasia Rectory doing bookkeeping and cranking out the weekly Sunday bulletin. She was an avid bowler with the St. Anastasia Ladies League. She later was employed full time for CETA, the County Education Training Act, where she stayed until she retired in 1981. Throughout her life, Amanda was involved in volunteer bookkeeping and correspondence for several organizations including AARP and the Croatian Catholic Union. Amanda loved to entertain and often hosted family and friends in her home. She was a key member of the WTHS class reunion committee, planning events for classmates until their final 70th reunion in 2009. St. Anastasia Church was a big part of her life as well and she served on several committees for the parish. She was also a proud member of the Croatian Fraternal Union and the service sorority Beta Sigma Phi. With her family, she enjoyed numerous family vacations from their famous road trips to wrangling her three small children on overnight train trips to visit her sister Katherine in Maine. After retirement, Jim and Amanda created many travel memories, often with friends and family, and in 2009, Mandy shared a trip to Croatia and Slovenia with her children. Known to so many as “Aunt Mandy,” she filled the role of “matriarch” and historian for the large Kerpan family, keeping track of marriages, births, graduations, and deaths for well over 100 nieces and nephews. Until very recently, she produced an annual family newsletter and worked diligently with her brother Mike, organizing the yearly family reunion known as Rokova, a feast day devoted to the patron saint of her family’s birthplace, Sveti Rok, Croatia. Amanda is survived by her brother Michael, her children Barbara (Michael), James (Lisa), Jeanie (Brent), and two granddaughters, Caroline and Liesl. She will also be remembered by many nieces, nephews, and close family friends whose visits and cards were much appreciated. She is predeceased in death by her husband James Wolf, her parents, Paul and Ana (Berkajlicic) Kerpan, son-in-law Gary Palmisano, her beloved siblings, and a multitude of devoted four-legged friends. A visitation will be held on Thursday, October 5 from 5:00 – 8:00 p.m. at Peterson & Patch Funeral Home in Waukegan. A second visitation is scheduled at St. Anastasia Church from 9:30-10:30 a.m. followed by Mass of Christian Burial beginning at 10:30 a.m. In lieu of flowers, the family asks that contributions be made to St. Anastasia Church, or the charity of your choice.

Amanda Mary (nee Kerpan) Wolf passed away on Thursday, September 28 after 95 amazing years of life filled with a love of family, friends, dance, travel, and her Croatian heritage. She was raised on a farm north of Waukegan in Beach Park in... View Obituary & Service Information

The family of Amanda M. (nee Kerpan) Wolf created this Life Tributes page to make it easy to share your memories.