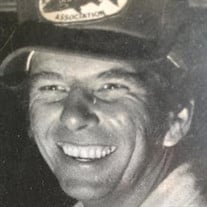 Arthur “Burt” Atkinson, 77, resident of Waukegan, IL for over 70 years, died May 25th, 2017 at Lake Forest Hospital.  He passed shortly after working on Lake Michigan, doing what he loved most, fishing.             Son of Alfred Fred Atkinson and Frances Bray, he was born on August 28th, 1939 in Lake Forest, IL.  He graduated from Waukegan High School. He spent time early in his life working around Lake Michigan and local communities.  During the late 1950’s and 1960’s, he worked at Outboard Marine Corporation in the engineering race group as a boat builder, eventually turning his love for the water into a career as a professional fisherman.  After transitioning to fishing, he also spent time with Falcon Marine in the early 70’s. Being a captain on Lake Michigan for nearly 50 years, he truly loved the lake and people around it, devoting the majority of his life to it with support of his family.   Starting in the Fall of 1980, he served as an advisor to the Great Lakes Fishery Commission overseeing the fisheries restoration of the Great Lakes.  Burt and wife Donna are most known for the “Atkinson Boat House” during the 70’s.  Captain Burt, “the Admiral” was one of the early captains to begin charter fishing out of Waukegan Harbor and ultimately built a business from it, expanding into Commercial Fishing shortly thereafter.  He enjoyed his time as an early member (#104) and contributor to the Waukegan Yacht Club.  He contributed to the club via multiple roles over the years, including Commodore. Burt married Donna G. Clifton in January of 1966 who survives along with their two sons, Arthur and David. Living memorial will be from 11:00 AM to 2:00 PM on Saturday, August 5, 2017 at the Waukegan Yacht Club 199 S. Harbor Place, Waukegan, Illinois 60085. Donations are welcome, we're donating to the National Fallen Firefighters Foundation as a thank you to the many firefighters that risked their lives attempting to save his. Donations can be made by going to https://www.firehero.org/donate/

The family of Arthur "Burt" Atkinson created this Life Tributes page to make it easy to share your memories.

Arthur “Burt” Atkinson, 77, resident of Waukegan, IL for over...

Send flowers to the Atkinson family.