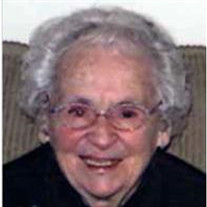 Erika Gertrude Johanna Nieper (Keinath), 93, of Waukegan died peacefully Sunday morning February 28, 2016 at the Rolling Hills, Zion assisted living community. She was preceded in death by her husband of 32 years, Henry E. W. Nieper and her son-in-law, Edward Saulius. Surviving loved ones include her children: Louis Nieper, Elaine Saulius, and Edward Nieper. Also soon-to-be son in law, Jon Smith and extended family, Kristina Gall, Ilona Hirn, George and Roma Stoltengofas, Joseph and Poala Hirn, their son Felipe, Christina and Steven Arseneau and their children Theodore and Eleanor. Erika was born March 18, 1922 in the Bavarian Alps town of Oberstdorf, Germany to Gustav and Cecilia Keinath. At the age of about four, her parents moved their family to the northern Italian town of Riva to take ownership of a hotel. In her growing up years in Riva, she became a competitive swimmer, winning many regional medals. She enjoyed snow skiing, ice skating, and exploring the mountains around Riva. She found and developed talents in charcoal sketching, water colors, and the piano. She also became a wonderful cook and baker. As World War II got worse, her father died suddenly from the strain of trying to operate his hotel in the midst of the war. The family relocated to her mother’s hometown Munich, Germany to wait out the war. When the war was finished, the U.S Government hired her as an interpreter as she was fluent in German, Italian, and English. It was there that she met her future husband, Henry, a soldier in the U. S. Army. They had planned a 1948 wedding in Munich when Henry was suddenly called back to his hometown of Corsicana, Texas for several months to attend to some urgent family matters. Instead of waiting until Henry could get back to Munich, they got a hookup on the transatlantic telephone cable and were married over the telephone by a judge in Corsicana. Erika and Henry relocated to the U. S. 1952 by way of Dallas, TX and Chicago. Erika became a U. S. citizen in 1957. They eventually settled in Waukegan to raise their family. Erika worked until retirement with the Scott Forseman Co., Glenview, IL, a publisher of textbooks, famous for their “Dick and Jane” elementary school readers. She worked as a manuscript typist in the college textbook department, typing English, German, Italian, Spanish, French, and mathematics texts. Erika introduced her children to a wonderful diversity with her love of art, music, sports, and languages. She instilled an appreciation for education and hard work. But she also took time for fun, laughing, and having a good time. Mainly, she was a nurturing mother whose family always came first. We will miss her very much. And we will have many happy and enjoyable memories to fill her absence. Funeral services will be 11:00 AM on Monday, March 7, 2016 at Peterson & Patch Funeral Home, 408 Sheridan Rd, Waukegan. Visitation will be from 10:00 AM to time of service at the funeral home. In lieu of flowers, please consider making a donation to Rolling Hills Campus, Zion, IL 60099 www.rollinghillscampus.org .

The family of Erika Gertrude Johanna Nieper (Keinath) created this Life Tributes page to make it easy to share your memories.