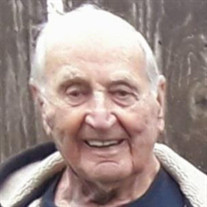 Deeply loved by many people beyond his family, George P. Doyle, 89, passed away peacefully Jan 11 at home. He was born 8-28-32 on the scrappy south side of Chicago. After Leo High School, George joined the U.S Air Force and became a gunner on a bomber during the Korean War. He married (late) Marilyn Neswick, of Sioux City, Iowa, in 1955, working as a bricklayer after his military service and, for a time, even moving his young family to Nevada while commuting weekly to worksites 100s of miles away. That willingness to work hard and learn new things lured him to real estate back in the Chicago area, in which he thrived as a broker and owner at Poe and Poe for decades in Waukegan and across Lake County. George loved to fish and hunt. He loved to play golf and was very proud of his hole–in-one at Shadow Wood Country Club in Florida. He also was a passionate traveler and could hold the attention of an entire table telling stories of his adventures in places like New Zealand, Bulgaria, Quito and some dark river on the Colombian border. Back in his easy chair, in Fort Myers, Florida during the winter/spring and Waukegan during the Summer/Fall, George also enjoyed watching (and betting) on sports. The Cubs and Bears were his favorites, but he supported any team called “Chicago,” and, in recent years, especially loved the technology allowing him to fast forward through TV commercials. George is survived by 2 children, Michael and Kathy (Kenny Fike), 3 grandchildren, Eric (Julia), Jason, and Daniel (Olga), 5 great grandchildren, Isaiah, Clara Rose, JJ, Sasha, and Sophie. Senator Doyle’s life revolved around his many cherished friends, including George and Jackie, Dennis and Karen, spending many trips in the Cayman Islands during Pirates Week with the Cayman 7 and their friend Slim Breeze, Newt and Terry, who were like family to him over many decades, Skinner and Wynne, Booner and Barbara, Baco and Kathy, Hawk and Pais. He spent many a wonderful holiday with Linda and Charlie; he always said Linda made the best biscuits and gravy. George is missed very much by all those whose life he touched. A celebration of life will be held in the spring. Please sign our online guestbook at www.waukeganfunerals.com.

Deeply loved by many people beyond his family, George P. Doyle, 89, passed away peacefully Jan 11 at home. He was born 8-28-32 on the scrappy south side of Chicago. After Leo High School, George joined the U.S Air Force and became a gunner on... View Obituary & Service Information

The family of George P. Doyle created this Life Tributes page to make it easy to share your memories.

Deeply loved by many people beyond his family, George P. Doyle,...

Send flowers to the Doyle family.