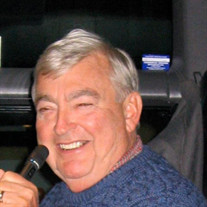 James Edward Bush, Jr. of Lake Forest passed away ‘surrounded by family, peacefully’, on October 29, 2020, in Lake Forest, Illinois. While he always hated to be the first to leave a party, he departed this world the same way he occupied it - bravely, on his own terms, revealing life’s most important lessons. James loved the idea of a catchy name and a good story - whether you knew him as James, Jim, Jimmy, or Seamus, he was an aspiring Irish seanchai storyteller who was waxing lyrical long before he kissed the Blarney Stone on a fresh fall day in October sixteen years ago. His stories cracked even the most reluctant listener, and he had a unique way of connecting with anyone around him. He was born on June 23, 1935 in Waukegan, Illinois, to James Edward, Sr. and Helen (Wubbel), known to the community as Eddie and Dorsch. Eddie passed away at an early age, leaving his beloved Dorsch and Jimmy to make their way as a dynamic duo. James was a sickly kid with big ears who pushed through illness and blossomed under Dorsch’s watchful eye and careful attention. In accordance with her devotion to the Catholic Church, Dorsch sent him to elementary school at nearby Immaculate Conception. He graduated from Waukegan Township High School in 1954, and headed to Southern Illinois University in Carbondale for three years before honoring the call to join the U.S. Army. He sailed to Korea to guard the bridges between the north and the south, reaching the rank of Sergeant E-5 before transferring to the Army Reserve in 1960. He dabbled in carpentry with his Uncle Bert before joining the sales team at Anchor Coupling in Libertyville in 1961. He did more than sell hydraulic hose assemblies at Anchor - he also wooed and sold fellow Anchor employee Lora Lee on the idea of marriage. They wed in June 1964, and the Dorsch / Jimmy duo expanded to become a close trio once more, until Dorsch’s passing in 1977. Together, James and Lora worked every opportunity they could - from cutting hair to renting apartments to hawking baby shoes to appearing in advertisements for a friend’s invention - to make a life for themselves. They opened an Insty-Prints franchise in Waukegan in 1970 with friends, taking full ownership in 1989. James pushed Insty-Prints for 50 years - it was a source of pride that he was able to be a vital component of the business until his passing. He donated several residential properties to Habitat for Humanity, to give others a chance to work it like he did. James colored his years with his sweet schnauzer Heidi, the Two Shoes canoe group, a tub of a boat he christened as the Lora Lee, the restoration of his high school 1948 Chevy Fleetline, and devotion to travel both national and international. He was blessed with two children, Kevin (Flora) and Bridget, and Kevin’s two boys, Logan and Colin, for whom he did and would do anything. A man of many interests, he was involved at one time or another with the Jaycees, the Elks, the Sons of Norway, the Irish American Heritage Center, and the American Legion. There are no words to express how much he and his insightful wisdom will be missed, though his family is comforted and inspired by the courage of his last days and his ability to charm until the very end. Visitation will be from 5:00 - 8:00 PM on Thursday, November 5, 2020 at Peterson & Patch Funeral Home at 408 N. Sheridan Road, Waukegan. The family will receive those who wish to pay their respects, and has taken precautions to do so in accordance with Covid safety guidelines. If not able to visit in person, the family would appreciate good thoughts and memories shared on the online guestbook at www.waukeganfunerals.com . Funeral services will begin with a remembrance ceremony at 10:00 AM on Friday, November 6, 2020 at Peterson & Patch, followed by interment at Ascension Cemetery in Libertyville, Illinois. The family will make a virtual link available for those unable to travel that wish to join for Friday’s ceremony. Arrangements are under the direction of Peterson & Patch Funeral Home at 408 N. Sheridan, Waukegan. In lieu of flowers, please consider a donation to St. Jude Children’s Research Hospital or a charity of your choice. Please sign our online guestbook at www.waukeganfunerals.com. Please join us on zoom at https://anchoragroupllc.zoom.us/j/5427219496?pwd=UWo3dmdnaVd6T2FDSmNOb0FZMlN6Zz09 Meeting ID: 542 721 9496 Passcode: ninja One tap mobile +19294362866,,5427219496# US (New York) +13017158592,,5427219496# US (Washington D.C) Dial by your location +1 929 436 2866 US (New York) +1 301 715 8592 US (Washington D.C) +1 312 626 6799 US (Chicago) +1 669 900 6833 US (San Jose) +1 253 215 8782 US (Tacoma) +1 346 248 7799 US (Houston) Meeting ID: 542 721 9496 Find your local number: https://anchoragroupllc.zoom.us/u/eaBIoBCpS

James Edward Bush, Jr. of Lake Forest passed away &#8216;surrounded by family, peacefully&#8217;, on October 29, 2020, in Lake Forest, Illinois. While he always hated to be the first to leave a party, he departed this world the same way he... View Obituary & Service Information

The family of James Edward Bush, Jr. created this Life Tributes page to make it easy to share your memories.

Send flowers to the Bush, family.