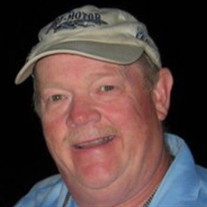 James Oliver Trick, age 69, died after a short illness on July 19, 2018, in Chicago, Illinois. Jim is survived by his wife Nancy (nee Germaine-Bagnall) Trick of Waukegan, his sister; Judy Trick of Walled Lake, Michigan, Step-Children; Megan (Darren) Spaur, Waukegan, IL, Jason (Melanie Brooks), Bagnall, Hazelpark, Michigan, Natalie Filipek of St. Claire Shores, Michigan and Grandchildren Anna, Canada and Emery Spaur. Jim is preceded in death by his parents Margaret and Grant Trick of Huntington Woods, Michigan; and his first wife, Kathy Conway, of Owosso, Michigan. Born on April 30, 1949 in Detroit, Michigan Jim graduated from Berkley High School in 1967, and thereafter from Eastern Michigan University. Following college graduation Jim attended Officer Candidate School in Pensacola, Florida in preparation for a Navy Career as a jet pilot. He retired early from the Navy to care for Cathy until her death several years later. Jim was employed many years by Ford Motor Company and retired in 2005. Jim was a great family man and a loving grandfather. He was a social person who was enthusiastically involved with the Experimental Aviation Association, Livingston County (Michigan) Chorale, Ridgedale Players, and a variety of other locally known singing groups in the greater Detroit area. During periods of time he also was a professional actor and understudy for commericials and locally filmed feature movies. Jim was a member of the Shepherd of Lakes Lutheran Church in Brighton, Michigan and attended The First Methodist Church of Waukegan when spending time there with his family. Jim’s family and friends will always remember him as a generous and compassionate person who was willing to help, or provide a smile when most needed by those around him. A Celebration of Life and Tribute is scheduled for Thursday, August 2nd at Bonnie Brook Gulf Course (2800 N Lewis Ave, Waukegan, IL 60087) from 5:30-7:30 PM. A buffet dinner will be served from 5:45PM on, followed by a short memorial officiated by Dr. Cecelia Harris of The First Methodist Church. All are welcome to attend and celebrate Jim’s life. Jim’s family would like to thank the many physicians, nurses and respiratory therapists of the ICU at Vista-East as well as those in the MICU at Loyola University Medical Center. You gave Jim and our family your all, and represent the gold standard in care, communication and compassion. In lieu of flowers, the family suggests a charitable donation to the Experimental Aviation Association Young Eagles organization. More information may be found at: https://www.eaa.org/eaa/apps/donations/donationform.

The family of James O. Trick created this Life Tributes page to make it easy to share your memories.

Send flowers to the Trick family.