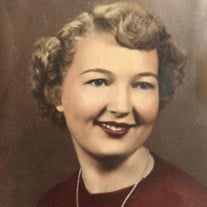 ﻿Katherine (Kay) Granger nee Welstead passed away peacefully with her family by her side on May7th In San Antonio, Texas where she spent the last 2 1⁄2 years with her daughter and son in law. Kay was born In DeKalb, Illinois on August 16, 1935 to Burton and Margle Welstead. She moved to Waukegan, Illinois in her early childhood and attended Waukegan Public Schools. After graduating from Waukegan High School In 1953 Kay began working at U.S. Steel where she met her husband Dean Granger. They married in 1956. Kay raised two children before returning to work at Glenwood Grade School for several years and then worked as a secretary at Jefferson Jr. High until she retired after 30 years of service Kay. loved spending time with her family especially her grandchildren and great grandchildren. Kay was an avid women's college basketball fan. She was a diehard UCONN fan as well as a diehard Chicago Cubs fan. She was thrilled that the Cubs won a world series in her lifetime. Kay Is survived by her son Tom (Jennifer) Granger and daughter Dina (Eli) Cruz; 3 granddaughters Amanda (Michael) Beskow, Ashley (Jordan) Schlipf and Arin Granger. She was also GG to Jaedon, Kaylen, Annabelle, Addison, Jackson and Beckett. Kay is also survived by a brother in law John (Isabel) Granger and numerous nieces, nephews, cousins and grand dogs including Maxx and Milo who along with her son in law took very good care of her while she was sick She Is preceded in death by her husband Dean Granger, Her parents Burton and Margle Welstead, her brother Robert Welstead, her in laws John and Dorothy Granger and sister in law Sharon Poulos. Funeral service will be at 11:00 AM, Saturday, May 14, 2022 at Peterson & Patch Funeral Home in Waukegan. Interment will be private at Highland Memorial Park in Libertyville. Visitation will be from 10:00 AM to time of service at the funeral home. Please sign our online guestbook at www.waukeganfunerals.com.

&#65279;Katherine (Kay) Granger nee Welstead passed away peacefully with her family by her side on May7th In San Antonio, Texas where she spent the last 2 1&#8260;2 years with her daughter and son in law. Kay was born In DeKalb, Illinois on... View Obituary & Service Information

The family of Katherine A. Granger created this Life Tributes page to make it easy to share your memories.

Send flowers to the Granger family.