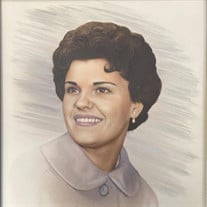 On July 26, 2021 Louise DeGroote of Winthrop Harbor, Illinois was welcomed into the loving arms of Jesus. She was 83 years old. Louise is survived by her two sons David DeGroote(Fountain Hills, Arizona, wife Mari) and Michael DeGroote (Palatine, Illinois); her sister Mariza Ohlsson (Seattle, Washington); and grandson Joseph DeGroote (Fountain Hills, AZ, son of David and Mari). She was preceded in death by her parents Louise and Miheil Bevcar; her husband Honore (Ray) DeGroote; siblings Julia Lestan, John Bevcar, and Stella Hinz; and grandsons Michael and Jacob DeGroote (sons of David and Mari). Louise was born on June 10, 1938 in Kambresko, Yugoslavia (now Slovania). She immigrated to the United States in 1958. Shortly after arriving to the Chicago area, she met the man that she would spend the rest of her life with. In February of 1962, Ray and Louise were married in Waukegan, IL where they raised their two sons. In 1988, Ray and Louise moved to Winthrop Harbor. Being an excellent steward of God’s blessings, Louise took her new house and created a beautiful home. She took great pride and joy in caring for this home, inside and outdoors. She had a beautiful garden with vegetables and flowers. Her yard was pristine and meticulously detailed. Louise created not only a sanctuary for themselves, but also for birds, butterflies, deer, and all other creatures great and small. This home brought great joy and happiness to Louise up until the day of her death. Visitation Saturday, July 31, 2021 at St. Anastasia Church, 624 Douglas Ave, Waukegan IL from 9:30 a.m. until time of funeral Mass at 10:00 a.m. It will be immediately followed by a graveside burial ceremony at Ascension Catholic Cemetery in Libertyville, IL. Interment Ascension Cemetery. Funeral arrangements entrusted to Peterson & Patch Funeral Home.

The family of Louise DeGroote created this Life Tributes page to make it easy to share your memories.

Send flowers to the DeGroote family.