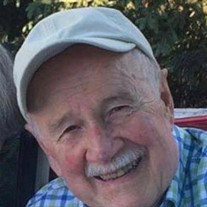 Milan “Papa” Kajfez, age 90, of Waukegan, IL returned to the Lord peacefully on July 27, 2019. Milan was born on July 8, 1929 in Banja Loka, Slovenia, Yugoslavia to Matija and Katarina (Marinc) Kajfez. Milan immigrated to the US in 1951 and settled in Waukegan where he pursued the American Dream. Milan met the love of his life, Dolores (Sutinis) Kajfez at the downtown Walgreens and they were married in 1959 at Immaculate Conception Catholic Church by Fr Paul Cull, who would later baptize their 3 children. Milan lived an extraordinary life, the 14th of 15 children in a family that was fractured by WWII. He fled his country with little more than the clothes on his back, strong determination and a work ethic like no other. Milan became a skilled dental technician and subsequently, the owner of Waukegan Dental Laboratory. He built a thriving business, employing many local technicians until his retirement. Milan was an active member and past-president of the Illinois Dental Lab Association. His employees were like family and he would host Wednesday Night volleyball games for them in his back yard, followed by a cook out, serving homemade wine and Pina Coladas. Milan and Dolores were notorious for social gatherings in their lovely yard, surrounded by beautiful flower gardens and a large vegetable garden that Milan tended for decades. Milan enjoyed the outdoors and was an avid gardener, tennis player, hunter and fisherman. His workshops are evidence of his handyman expertise, DIY spirit and years as a hobbyist woodworker. His greatest legacy was his family who he always placed above all else, instilling strong values and providing a wonderful life full of travel, tradition and love. Milan is survived by his wife of 60 years, Dolores “Tookie” Kajfez and three children, Laura (Chris Messer) Kajfez, of Tempe, AZ, Mark (Diane) Kajfez of Waukegan and Lisa (Michael) May of Waukegan; his beloved sister, Cveta (Stefan) Stojko of Toronto, CA; his 7 grandchildren, Tony Kajfez, Samantha Kajfez, James Epperson, Olivia Kajfez, Evan Epperson, Adam Messer and Paul Messer. Milan also leaves numerous nieces and nephews in Slovenia and Germany with whom he was able to visit, along with his entire family in 2018; it was a trip of a lifetime to his homeland and will be cherished by all of his descendants for the rest of their days. He was preceded in death by his parent and 13 siblings. Visitation will be held on Friday, August 2nd from 4-6 pm at Peterson Patch Funeral Home at 408 N. Sheridan Rd in Waukegan. A mass of Christian Burial will be held on Saturday, August 3rd at 10:00 am at St. Anastasia Church 624 Douglas Ave. Waukegan followed by a private interment at Ascension Catholic Cemetery. In lieu of flowers, donations in Milan’s memory may be made to St. Anastasia Catholic Church 624 Douglas Ave. Waukegan, IL 60085. Please sign our online guestbook at www.waukeganfunerals.com.

The family of Mr. Milan Kajfez created this Life Tributes page to make it easy to share your memories.

Send flowers to the Kajfez family.