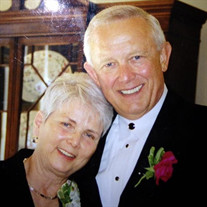 Ronald David Henry, 81, passed away on March 26, 2019 at the Cornerstone Hospice, The Villages, Florida after a long illness. He was the son of Clarence and Lola Henry and husband of Rosalie Therese Donohue of Waukegan, IL. Ron was born in Swift Current, Saskatchewan, Canada and emigrated to the United States in 1951. Following graduation from Waukegan High School in 1955, he attended Eureka College, Eureka, IL. He returned to Waukegan where he served in the Army Reserves and also worked in advertising and sales with Johnson Motors, WKRS and, later, Midwest Visual. Ron’s water-skiing prowess landed him in Johnson Motors’ advertising material where he was frequently the sole male among a bevy of beauties. Ron met his wife Rosalie in Waukegan in 1958 and they married in 1960. Together they raised four children as well as establishing and growing their business, AVCOM Audio Visual, Washington, DC. He retired from the day-to-day operations of the business in 2003 and set out to explore North America with Rosalie by his side. He and Rosalie traveled throughout Canada, and along the northern U.S. border and western United States before retiring to The Villages in 2005. Ron was preceded in death by his parents as well as by his brother, Robert. He is survived by his beloved Rosalie, his children Michael David Henry (Kelly), Michelle Therese Henry, Gregory David Henry (Joan), and Kerry Henry Maccini (Andrew), eleven grandchildren, and many nieces and nephews. A funeral Mass will be held at Saint Patrick Church, Wadsworth, IL at 10:00 am on Saturday, April 13, 2019. Visitation will begin at 9:00 am at the church prior to Mass. Peterson & Patch Funeral Home, Waukegan, IL is coordinating the arrangements. In lieu of flowers, the family requests donations to Mayo Clinic – Department of Development, 200 First Street SW, Rochester, MN 55905.

Ronald David Henry, 81, passed away on March 26, 2019 at the Cornerstone Hospice, The Villages, Florida after a long illness. He was the son of Clarence and Lola Henry and husband of Rosalie Therese Donohue of Waukegan, IL. Ron was born in... View Obituary & Service Information

The family of Ronald David Henry created this Life Tributes page to make it easy to share your memories.

Send flowers to the Henry family.