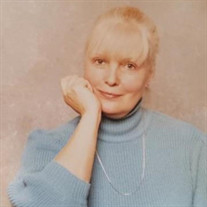 In Loving Memory of Rondi Gordon Rondi Gordon age 91 of Waukegan, IL passed away on April 21st, 2022 at Condell Hospital, Libertyville, IL. Being an extremely strong and healthy person, like a true Norwegian Viking, Rondi fought a long and... View Obituary & Service Information

The family of Rondi Gordon created this Life Tributes page to make it easy to share your memories.

In Loving Memory of
Rondi Gordon

Send flowers to the Gordon family.